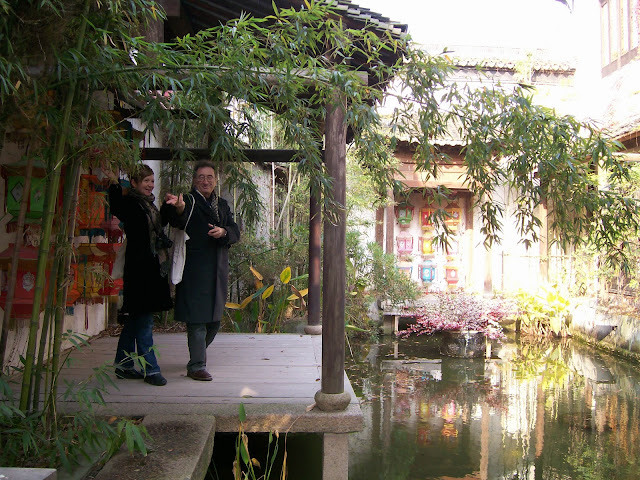 George Szirtes and Clarissa Upchurch on the water stage in 'The Big House', our mystery home for the night

Although I've just spent two weeks based in Shanghai, what I'll blog about first is the watery village of Jinze. Jinze (pronounced Gin Zeu– with long tone descending to rhyme with French 'peu') is about 80 miles from Shanghai but calm, rural and built around meanders of a river or a canal. Where exactly it is is still a mystery, as it was a late night mystery tour arranged by our gentle Chinese poet friend Xiao Kaiyu, to fill in the blank in our very sketchy 'programme'. Even Yang Lian doesn't know where it is, nor google, so it remains a dream of water, rain and rainbow bridges without sides that can be slipped on and over. I spent most of the journey trying to pronounce the name.

We arrived at night, and I slept in a vast room with ensuite jacuzzi and power shower room and an ensuite loo with heated toilet seat that raised its lid on approach. I woke at 5am and worked on my translations at the large trestle table before the windows, while waiting for dawn. When I opened the curtains I found I was next to a wide waterway swirling past my huge, wood-filigreed window. It had rained all night and the water seemed almost under the floor, and I wondered what happened during floods.

But it was a sunny day, so George Szirtes, Clarissa Upchurch and myself walked along the river/canal and over the numerous ancient arched bridges over it. At times the waterways forked. The complex we slept in was itself built between water, with water channels outside each door. We visited a Taoist temple and a Buddhist temple built around a 650 year old gingko tree strung with red lanterns. I think it was the first time I relaxed since I'd arrived in China, away from the cacophony of horns outside our Fudan University hotel.

After clambering over many bridges and ambling along narrow lanes of the village, and Yang Lian had lured George onto a dragon boat, we had lunch and were joined by Kaiyu, who whisked us away to what I thought was going to be a stroll in the vegetable gardens. And this is where the mystery tour became surreal, a Russian doll of surrealism was slowly opened behind the willow and bamboo paths. Hall after hall of exquisitely designed galleries were unlocked for us, their floorboards pastel shades of woods from the factories they had been reconstructed from. They contained antique furniture, craft objects, books, dolls, gourds, sedan chairs, wardrobes, puppets, emperors' beds, seals, and happiest of all – textiles. Heavily embossed silk robes for Buddhas, more 3D than embroidery. Locked in one endless hall were a mother and daughter of the Miao southwest China ethnic group, weaving their sumptuous cloth, silver in their hair. I'd come across them before on Qingcheng Mountain in Sichuan Province. Up more stairs to an attic where designer cloaks were being woven from silk organza and a raffia-like wool. Clarissa tried one on and it suited her perfectly. We were led out onto terraces with views of the waterways and their bridges. Kaiyu pointed to a room where he comes to write and we were invited to return for a writing retreat, an invitation I almost took up, before I remembered how far it was from home, this land of water like woven silk, of silk like woven water, yellow gingko leaves strewn on the ground like confetti. So back to the endless fifty-floor towers of Shanghai, via a visit to one of the founders of the Jinze Craft Museum, the quiet ex-artist Mr Hu, his champagne coloured poodles and talk of his friendship with Prince Charles and the royalty who have visited the Mystery for architectural design tips, before a dash for the rush-hour subway where we swayed with our luggage for hours before ascending at the Centre for the Oriental Arts, to another gift from Kaiyu – a concert by the fusion group Amrta, almost all women, and their spellbinding music. In my first row seat I waited and waited to hear the Erhu, a kind of two stringed fiddle, as it features in a poem of Kaiyu's I was translating, a powerful poem about his mother's ghost. I was not disappointed. It sounded hoarse, primeval and sad, and I can still hear it like the sound of water that has dried up. 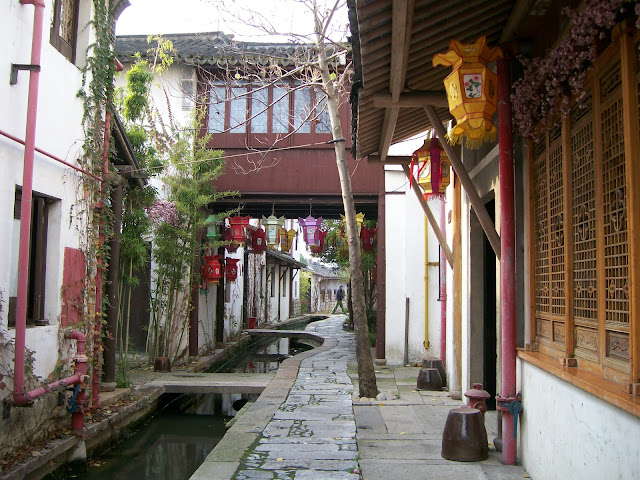 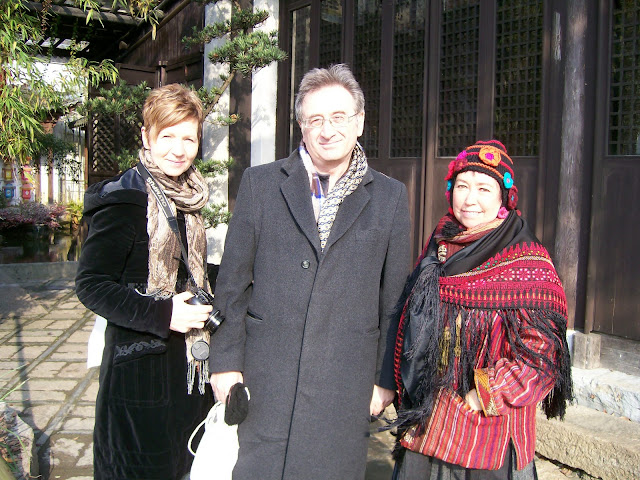 George Szirtes, Clarissa Upchurch and I, outside the breakfast room of 'The Big House' 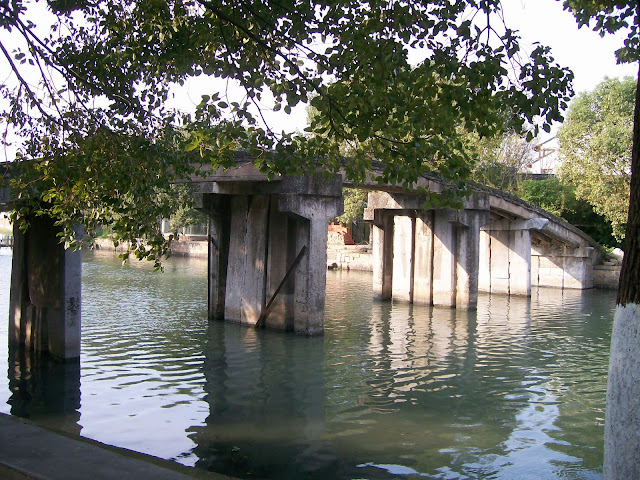 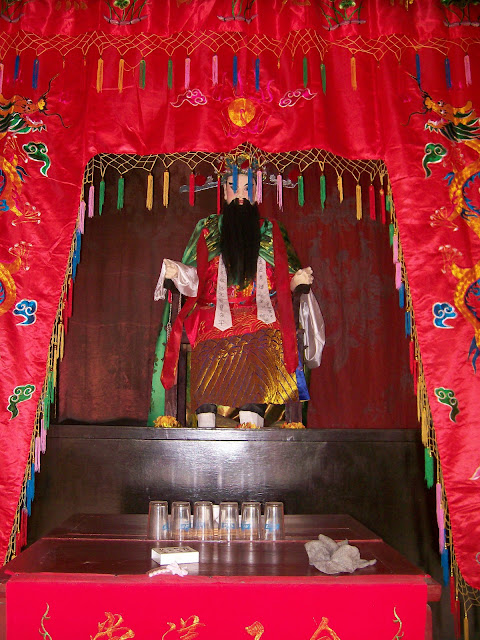 A shrine to a village elder in the Taoist temple 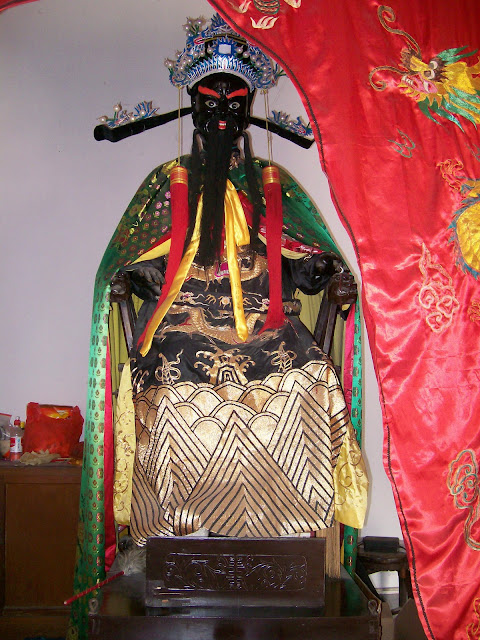 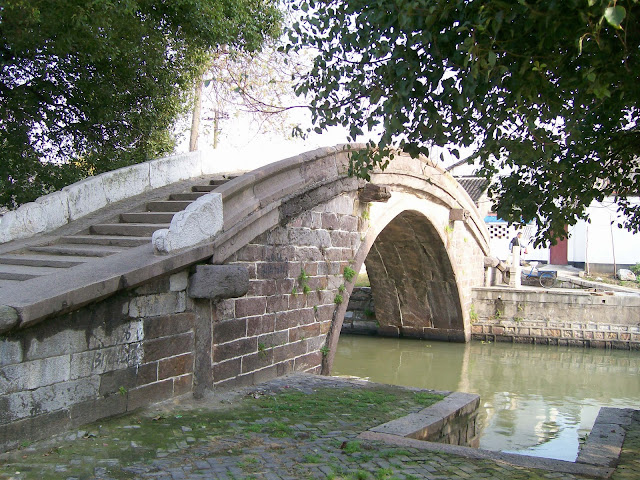 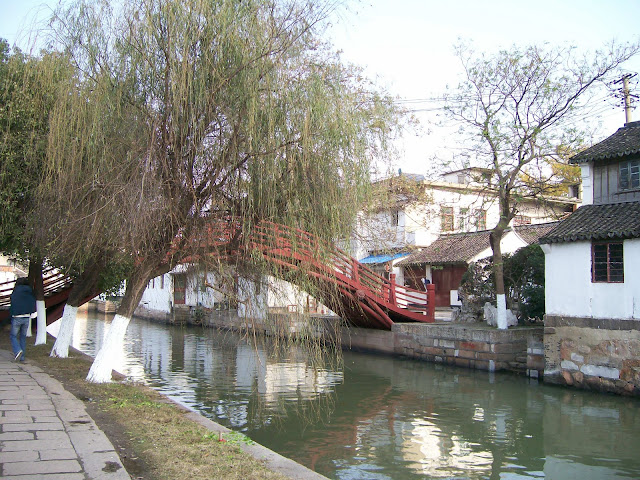 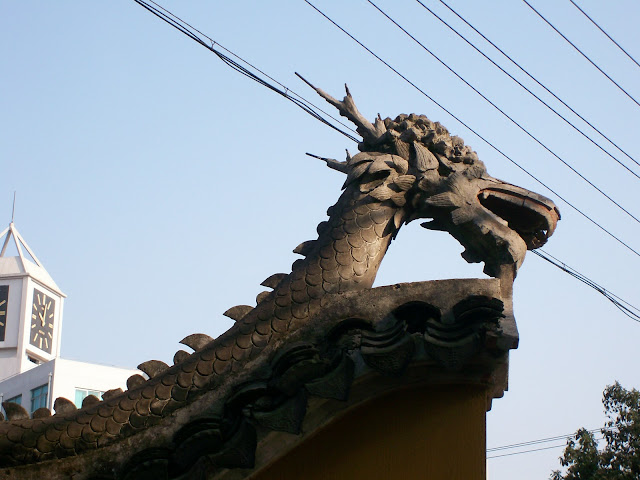 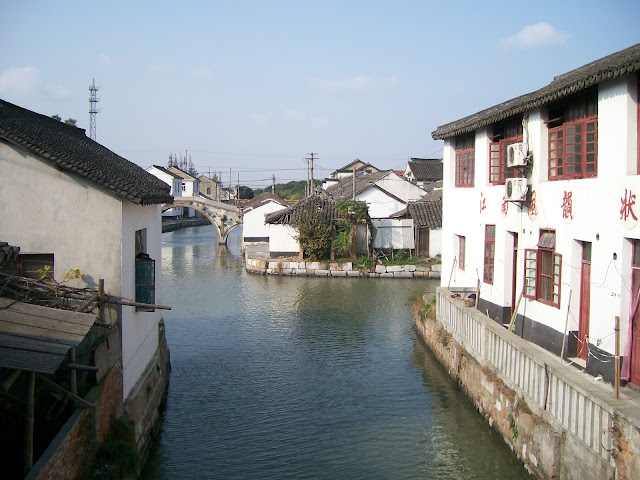 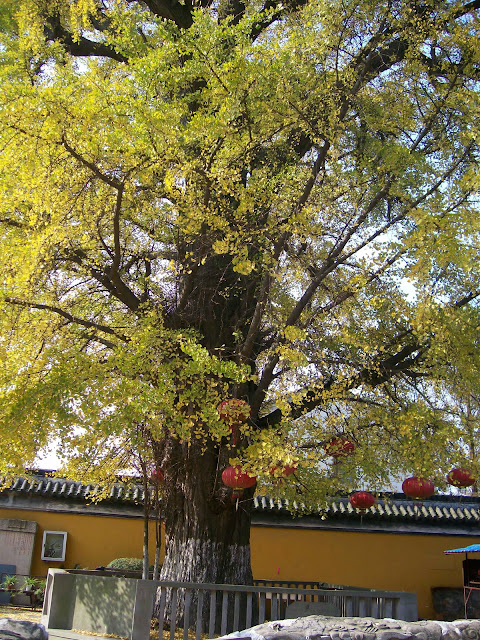 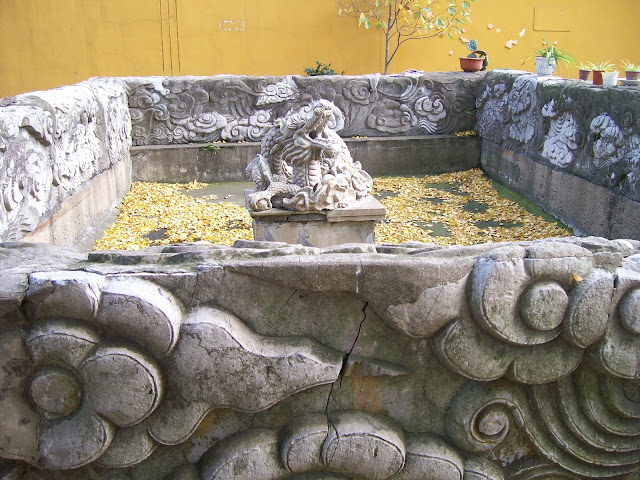 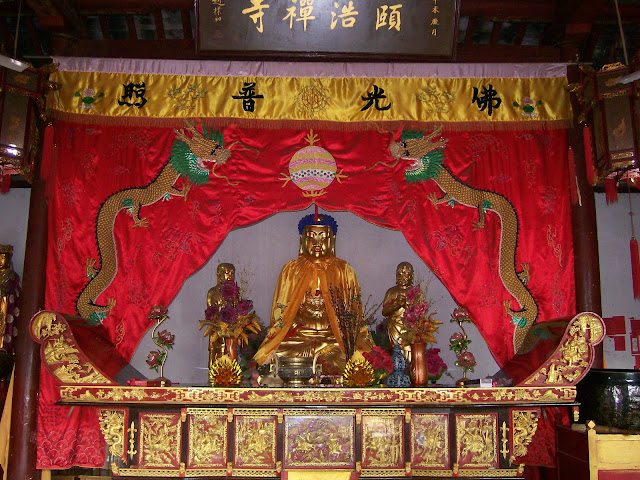 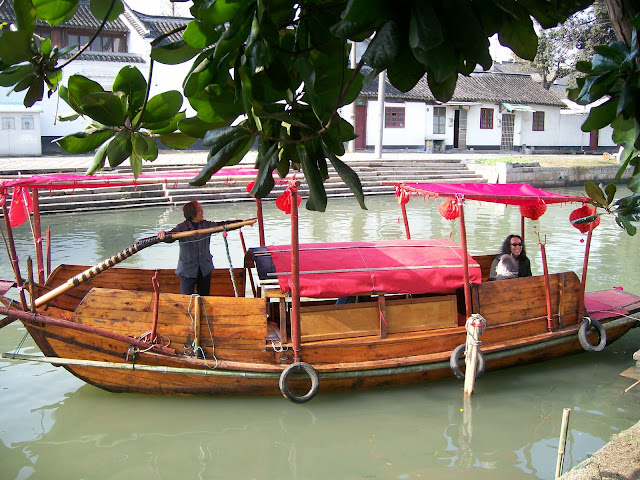 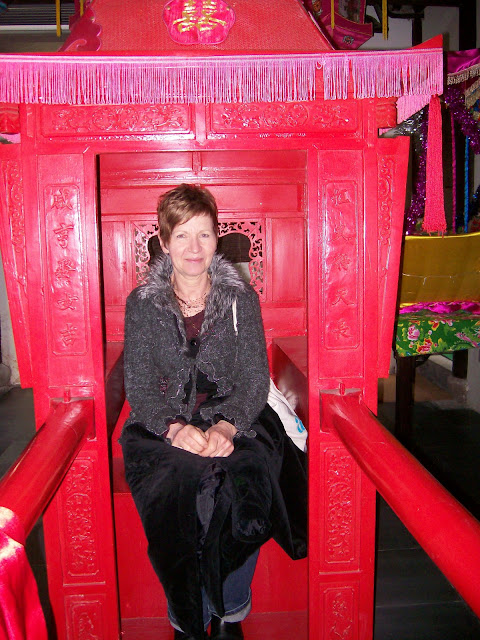 Clarissa in the bridal sedan chair 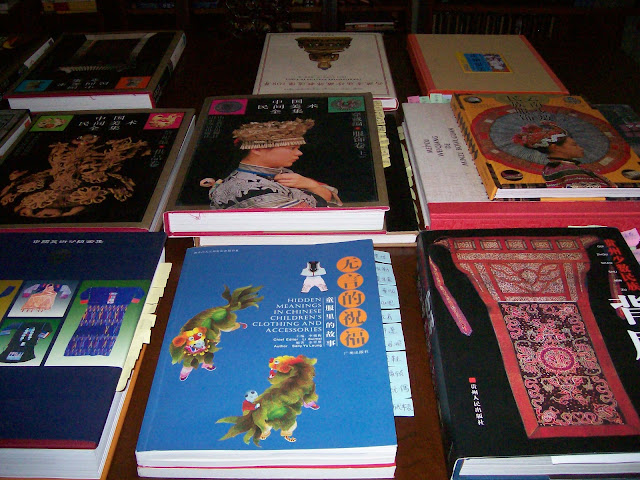 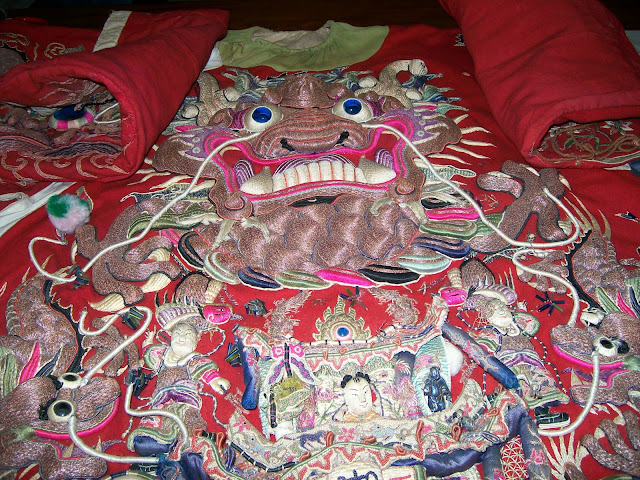 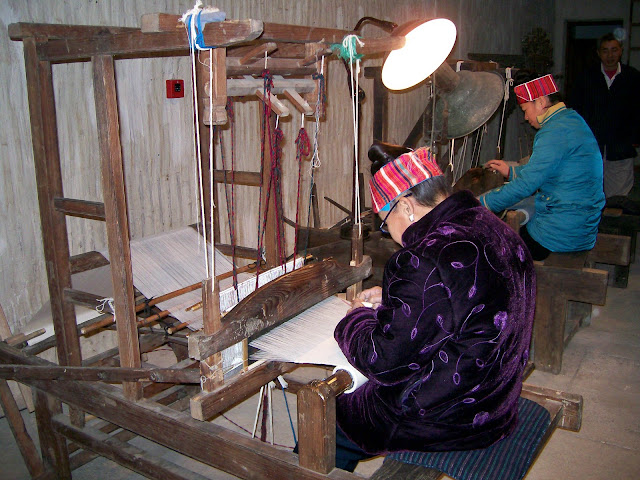 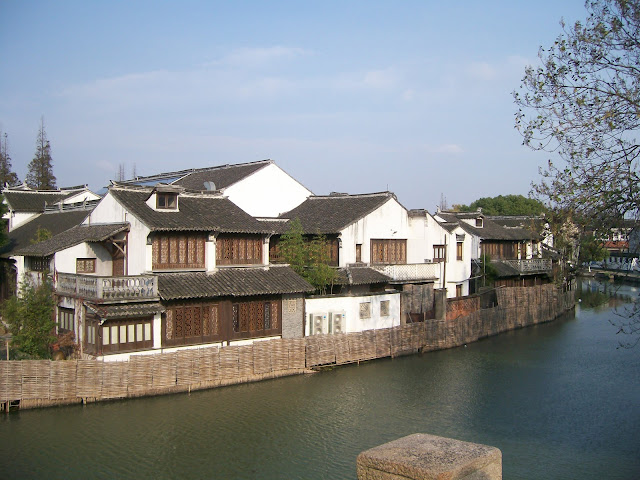 The two large wood filigree windows on ground floor were where I slept, the jacuzzi bathroom at the end on the left. 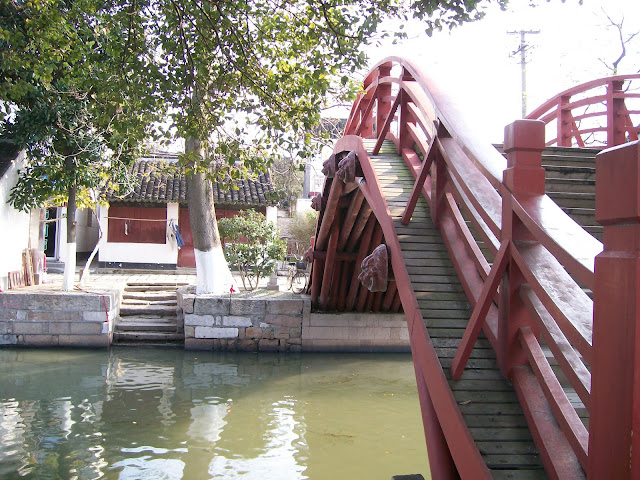 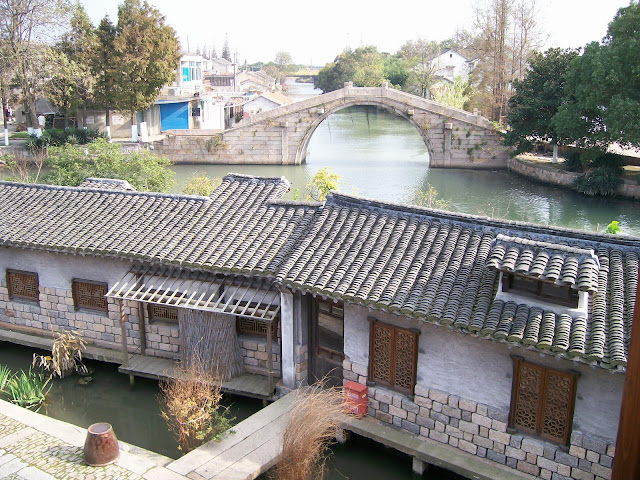 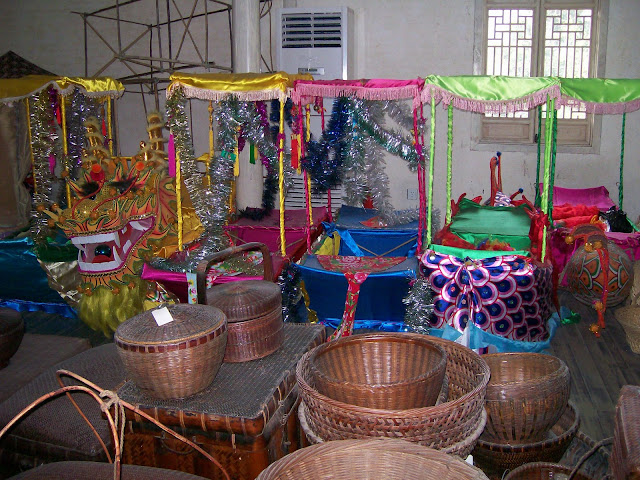 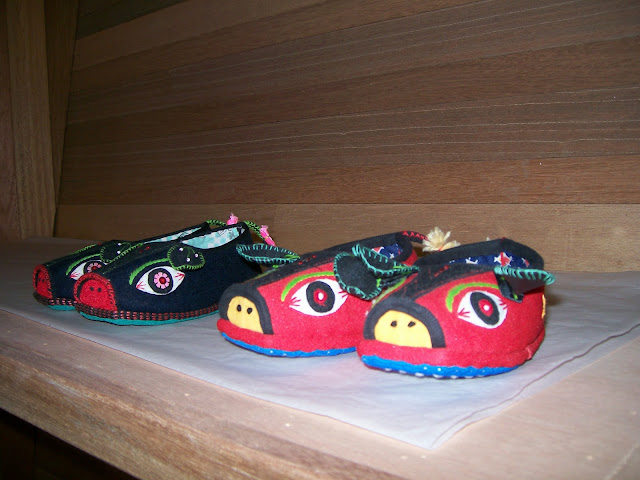 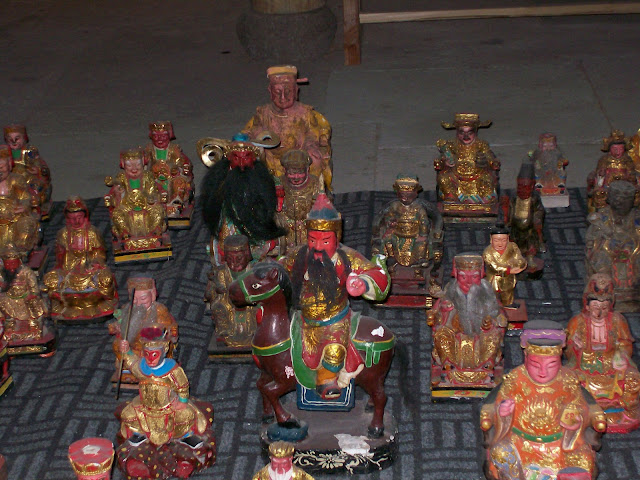