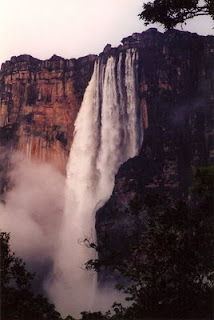 I've now scanned in some photos from my trips to Venezuela's Lost World in 1993 & 1995, and will try to load them here. The first is of Angel Falls from Ratoncito (Little Rat) island near the base where I camped for three nights, mainly in torrential rain all afternoons and nights as it was the rainy season. I had a fever and looking at the falls made me feel dizzier. They are one kilometre high which does give you vertigo, the way a channel falls then pauses, spirals then seems to rise back up before plunging down to become cloud long before hitting the plunge pool. When we hiked to the base the spray was like shrapnel or needle thin bullets. The cliff is sandstone and is translucent quartz in parts. It changes colour depending on the time of day and weather, from purple to rose-red to umber. 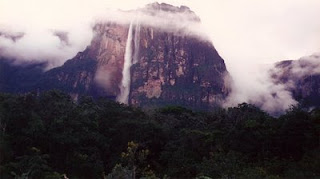 This is Angel Falls from the river. The first view was so exhilarating that we all stood up and the canoe almost tipped us in. 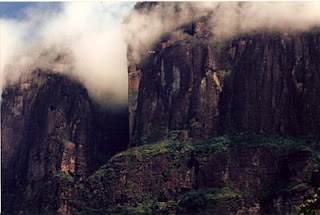 View of Devil's Canyon in the massif Auyantepuy from river. Can you spot the gnat sized monoplane just under the clouds? Just to give a sense of the scale. 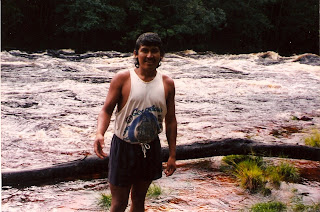 Eimasensen the Pemon canoe navigator, amazing knowledge of each rapid and rock. This river was steep like a staircase. The Pemon live near the tepuyes but are afraid of them and would hardly even look up at the jagged tesselated summit as we rounded each butte. Their gods live up there and on this particular one, Devil's Mountain, are the evil spirits the mawari and they believe the quartz panes in the sandstone are their windows. 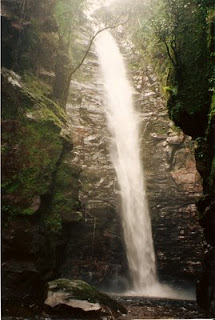 The sacred torrent in Kavac Caves inside Auyantepuy. The only way into the cave is to swim through a long winding narrow gully. When I did this a green vine snake swam alongside me. The next day we trekked to the hole at the top of the cave where the waterfall's thundering lip is. 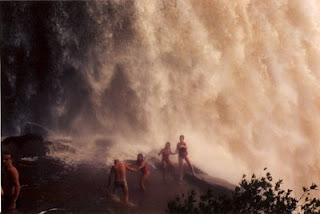 This is Sapo (Frog) Falls in Canaima Camp the other side of the tepui, where we first set out in the powered canoes up the Caroni then into Auyan (Devil) river in the canyon. I walked behind these falls. I was so relieved to reach the other side, only to be told I had to walk back.
Posted by Pascale Petit at 17:11 4 comments: