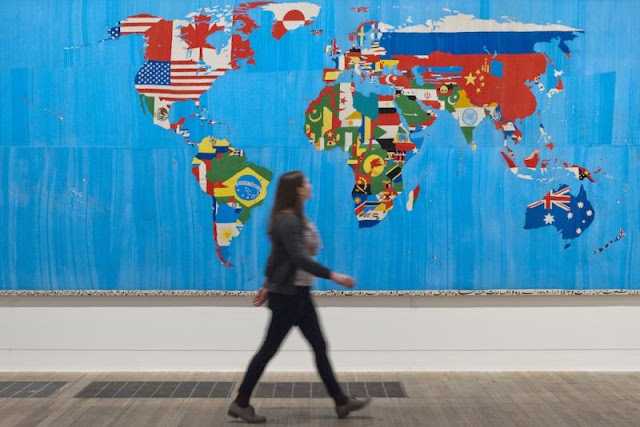 Last night the fourth session of my Poetry from Art course was in the map room of the Alighiero Boetti: Game Plan exhibition at Tate Modern. Twenty of us sat surrounded by huge tapestries of world maps embroidered by Afghan women in their homes. The stillness and poise contrasted with the noisy rooms of our last sessions in the Kusama exhibits. When the group was hushed and writing, I could almost hear the lapping of the oceans interwoven with the murmur of the embroiderers' quiet chatter as they sewed in their homes.

Boetti considered the women embroiderers as co-authors of these works, even though he never met them, as Islamic mores forbade contact. He outlined the countries and flags on canvas with Magic Marker, then handed them over to male clan leaders who passed them on to the women and girls who would have learnt their craft from an early age. I laid out photographs of the women at work on the maps, on the bench in the centre.  They were photographed by Randi Malkin Steinberger, who was allowed one day to take pictures of them for Boetti. She has since published a wonderful book of her photos.

I often ask the group to start by spending a few minutes quickly noting their immediate impressions of the art, before we discuss it or look at related poems. In this instance, hardly anyone had seen the show before the session, so I wanted them to have a chance to respond to the maps while they were still in the grip of that overwhelming awe and freshness I remembered when I first walked into the room and was surrounded by the colours of the world.

I laid out dozens of A3 photocopies of medieval map-views, complete with sea-monsters and wind-gods, on the second bench and showed them some images by two other artists who have worked extensively with maps, Guillermo Kuitca and Kathy Prendergast. We then read Elizabeth Bishop's poem 'The Map', Moniza Alvi's 'Map of India' and 'Topography' by Sharon Olds. These were examples of how the subject might be approached. Perhaps through close, precise, physical description of coastlines, as in Bishop's poem, intertwined with philosophical meditations on map-making, such as in her line: "are they assigned, or can the countries pick their colors?", or in Moniza's case, by focusing on one country which is significant for the poet, or they could try building an emotional and sensory map as Sharon Olds did, where a couple fly in from different continents to make love, still bearing the prints of those maps on their skins.

The group then had fifteen minutes to write a poem. I suggested they could assume the voice of the embroiderer, the artist, or even the map itself.  We had thought that Bishop's map seemed be alive enough to lift off the page. They could try using colour as their main motif, enveloped as we were by lemon, pink, silver, black, as well as kingfisher-blue oceans. They could use place names and their sounds. They could zoom in as Moniza had done, in to one country which was significant for them and write about a personal place, bearing in mind that even the most autobiographical voice in a poem is fictionalised, and not the author's quotidian self.
I wondered how they would manage, with so much information and little time to write. There are mostly women in the group, which may account for many choosing to write in the voice of an embroiderer. Needles flashed in and out of their lines as they read back. I'm always amazed how well they write under pressure, after being reassured that they are only expected to produce 'material in progress' and not poems yet.  Hearing them read their responses, as we were bathed in the glow of the tapestries, made me feel as if the world was constantly being remade. Some of the results will later be published in an online anthology on the Tate Modern website. 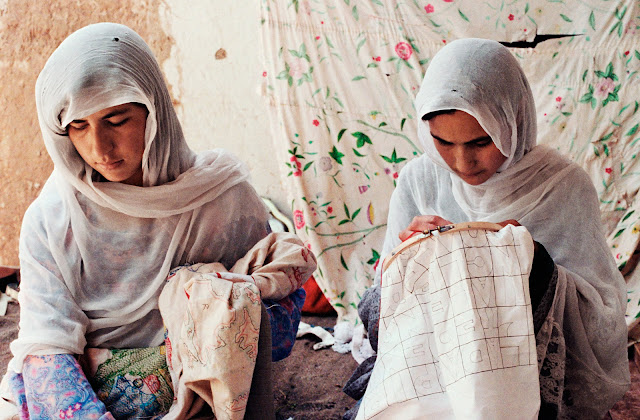 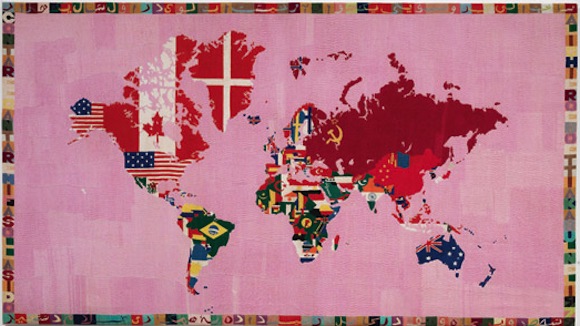