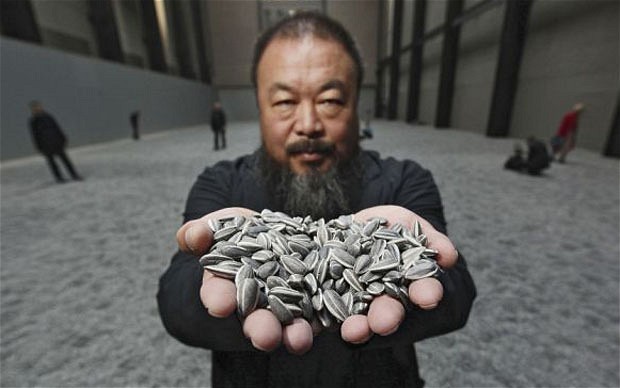 For our third session of Poetry from Art at Tate Modern we worked in the Turbine Hall, with Ai Weiwei's Sunflower Seeds installation. These 100 million sunflower seeds have been individually handcrafted over two years by the artisans of the city of Jingdezhen, famed for its production of Imperial porcelain. Ai Weiwei has spoken about how the work is a commentary on the 'Made in China' phenomenon. I brought the poem 'Father's Blue & White Porcelain' by the 'misty' poet Yang Lian as a way in for the group to write about the installation. Yang Lian, who now lives in London in exile from China after the Tiananmen massacre, is as experimental an artist, and like Ai his work engages in a critical dialogue with Chinese tradition and history.

First, we watched the 15 minute film Tate made of how the porcelain sunflower seeds were manufactured, from the men mining and pounding the kaolin to the women expertly painting each seed in three or four strokes, Ai there among them, answering tweets on his mobile phone as he chatted. He is an unpretentious teddybear of a man and his warmth somehow made the installation more accessible and human-scaled. We then returned to the Turbine Hall bridge and I passed around some large striped, black sunflower seeds from Dakota, bought at my local international store, to feel as we discussed Lian's poem:

A few of us thought there was the ghost of Keats' 'Ode on a Grecian Urn' when we looked at the way the father and his room are overlaid on and in the porcelain in a double exposure, the human pageant in the glaze. The images start out ordinary enough, but they soon morph: "a jar" turns unto "a jar of night', "tea" is a "a cup of darkness tea". Someone pointed out that the poem contained a deep well of history in it, both through the tradition of porcelain and in the layering of the past in the complex images: "the sky of old age" and "bloomings and fadings of seventieth birthdays".

I asked the group to sit around the Sunflower Seeds installation and write a poem about it incorporating one phrase from Lian's poem, such as "a glazed hand", "the sleep-talk". As his poem is made in a collage mosaic of images and thoughts, I wanted them to start a collage poem. I then read out quotes by Ai Weiwei when he was interviewed by Juliet Bingham and Marko Daniel (Tate curators), such as:

"In China, when we grew up, we had nothing... But for even the poorest people, the treat or the treasure we'd have would be the sunflower seeds in everybody's pockets."

"For me, the internet is about how to act as an individual and at the same time to reach massive numbers of unknown people.... I think this changes the structure of society all the time – this kind of massiveness made up of individuals."

As well as a phrase from Lian's poem, the group also had to incorporate a phrase from something Ai Weiwei had said in the interview. Homework was to carry on searching for phrases to include in a collage poem. They could find them from failed poems, notebooks, letters, anywhere. Then to print the results large, cut up the lines and rearrange them until they made a new sense. Some of the results will be published next month on the Tate Modern website in an online anthology of poems written this term.