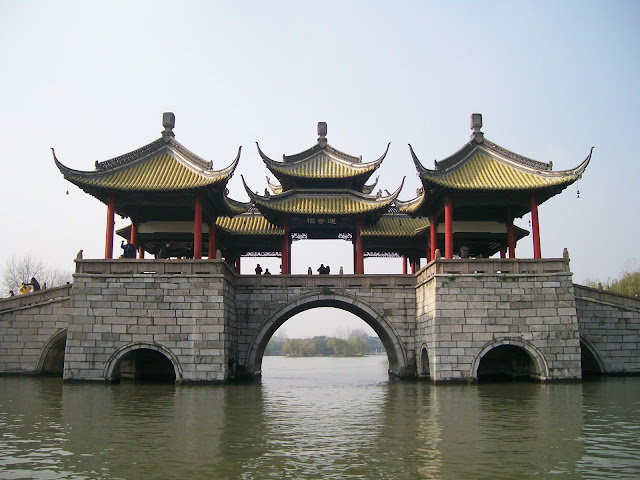 Our last weekend in Shanghai we caught a 330 kilometres an hour train to the city of Yangzhou, north west of Shanghai and across the vast Yangtze River. The train station was big as a Heathrow terminal. Yang Lian upgraded our first class tickets to super first with just one word whispered in the conductor's ear, so we settled in the sleek, private, dragon-head of the train and got to work. George Szirtes and I had one hour to write our translations of the Qing Dynasty 'Poem for the Red Bridge Autumn Ceremony' by Wang Hang – a devil of a quatrain in strict classical form, with a flood of info stuffed into the first two lines and what boiled down to two very short last lines in English. The original has seven characters per line and a strict tonal rhyme scheme. We did not yet have the literal translation, so most of the hurtling of the train ride was taken up with Lian giving us his version of the gist.

We would have one hour for 'polishing' in the hotel before going out to banquet with our hosts, then an early rise to read our efforts at the 9am ceremony.  I'm a dedicated free verser, so my failure to meet the challenge wasn't important, as long as I tried to produce something and made the gesture.

Shortly after dawn, we settled into our gaudy gondola and set off across Slender West Lake, the subject of the poem, which is about its naming, and warmed our hands on porcelain mugs of hot green tea with cozy lids, as banks of willow, bamboo and lily grass slid past and a girl played the zither. Rainbow bridges and curly pavilion roofs with tiles like dragon scales came into view; the water was photogenic as it always is even though it's often not itself and famous here for reflecting a fairy moon. We disembarked on a dreamlike lawn where I imagined there might only be a small huddle of poets reciting to each other. People were gathering beyond the bonsai tubs, but surely nothing to do with us.

Our hosts led us towards them and we stood in a line facing the crowd. Beautiful slender girls in purple costumes gave us sprigs of lily grass and scented red silk pouches to hold. Then a round table materialised decked with familiar glasses and I knew that a toast was imminent with the white liquor baijiu, which, thankfully, must be downed in one gulp. Perhaps the baijiu arrived after the readings – it's all a blur now – though I do remember that I had to read my attempt first, relieved that none of our hosts would understand it. Here it is, with some later amendments:


Poem for the Red Bridge Autumn CeremonyThe willow leaves trail to where lily grass yellows,the fang of flying geese and arched bridge paint echoes.Here in this crucible where the sun's molten gold flameswe should call our own haven Slender Western Lake.


And click here for George Szirtes' translation, in his blog. Later, he read his haunting sonnet 'Water', which begins "The hard beautiful rules of water..." and includes the magical line "That it shall arch its back in the sun". I read my poem 'What the Water Gave Me (VI)', which was translated into Chinese by both Lian and Kaiyu, so there was a distinct watery theme to our visit. As we only had a few of our poems translated during the fortnight, I heard George's 'Water' many times, that cat-like back-arching echoed by rainbow bridges. From our dragon-boat I spied waterfalls and wished we could stop to see them up close, though I suspected they were man-made.

Last time I was in China, in 2007, I flew from Shanghai to Beijing and from Beijing to Chengdu, and saw just how Shan-Shui China is with the almost continuous vistas of mountains, lakes and rivers that unfolded beneath my window. Yet the two mountains I climbed then – Huangshan (in Anhui Province) and Qingcheng (in Sichuan Province) – were both extremely wild and extremely tamed, with steps carved into every slope and sheer wall. On the summits of Huangshan there were otherworldly cloud- and mist-seas floating between the striated rock cliffs, there were also hordes of people squeezed onto the narrow paths of each jagged peak. Which reminds me of Victor Hugo's opening chapter to Notre Dame of Paris, where crowds surge along the streets, bridges and squares of medieval Paris like floodwater, as if humanity is alien as water and water is human as home. 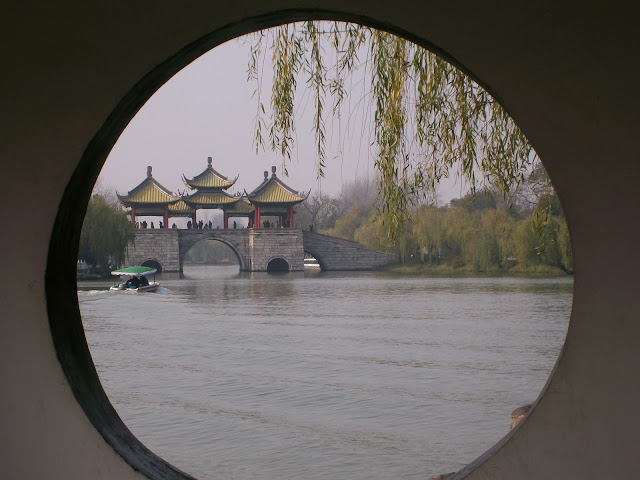 A lunar arch for viewing the Five Pavilions Bridge 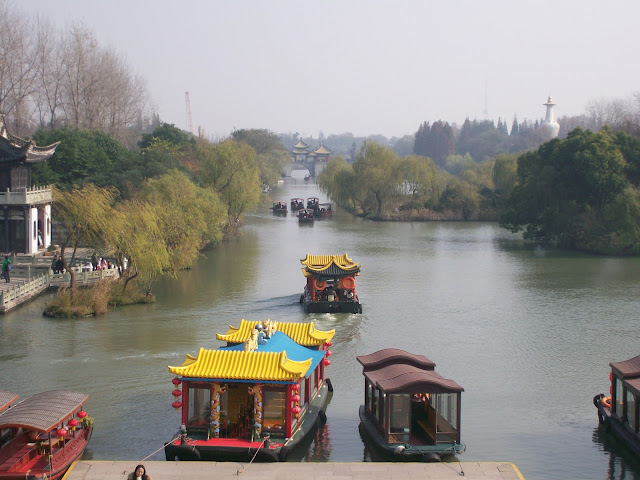 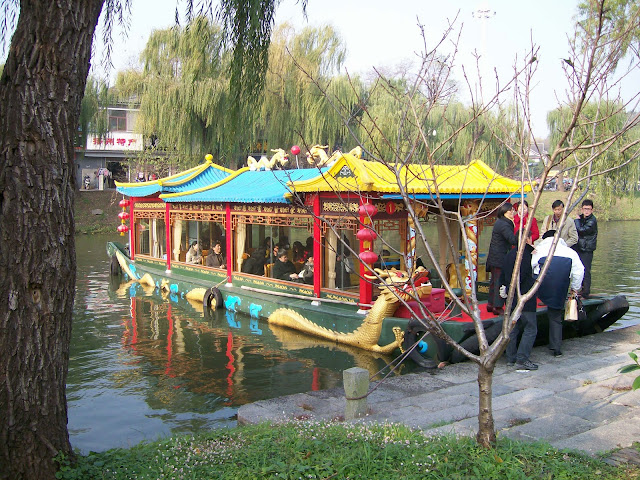 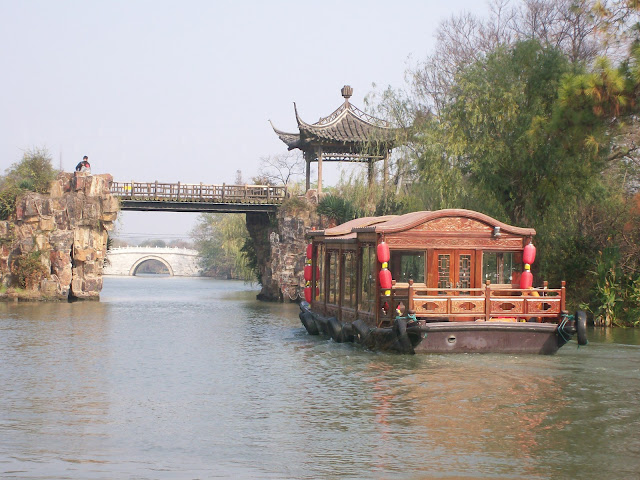 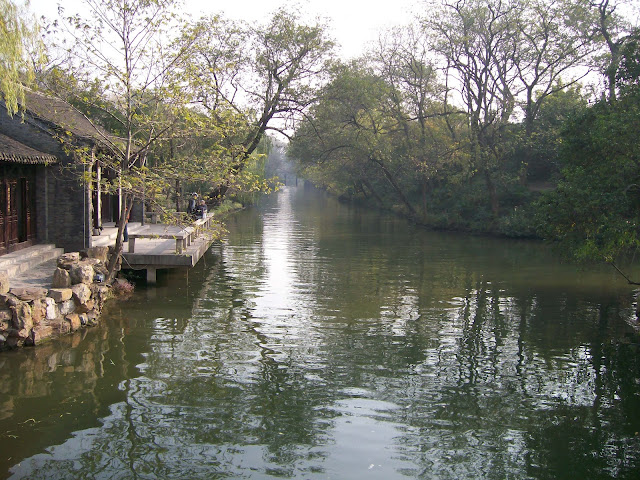 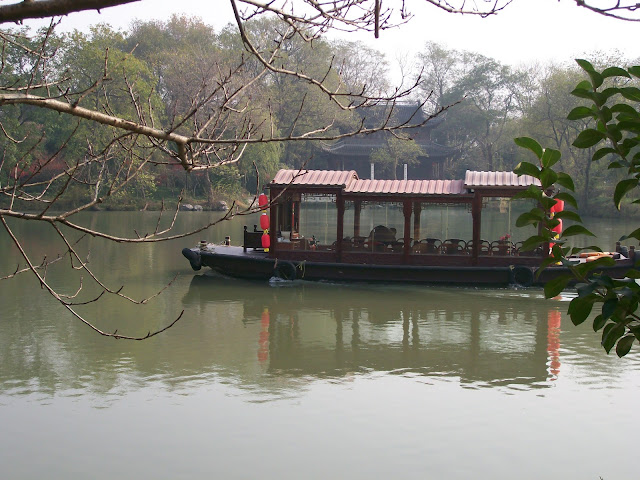 A boat and a mirror-boat 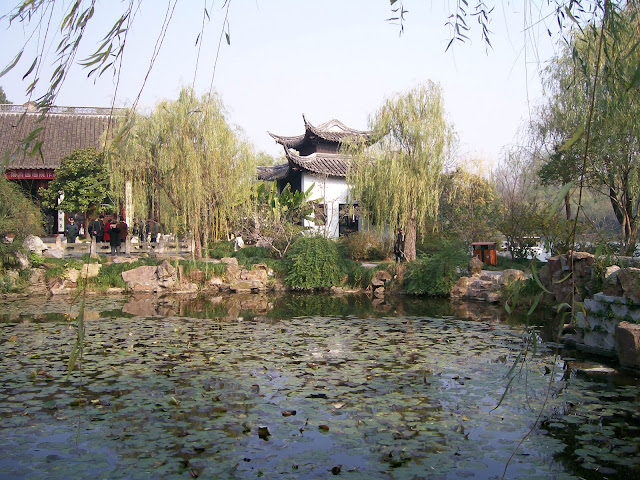 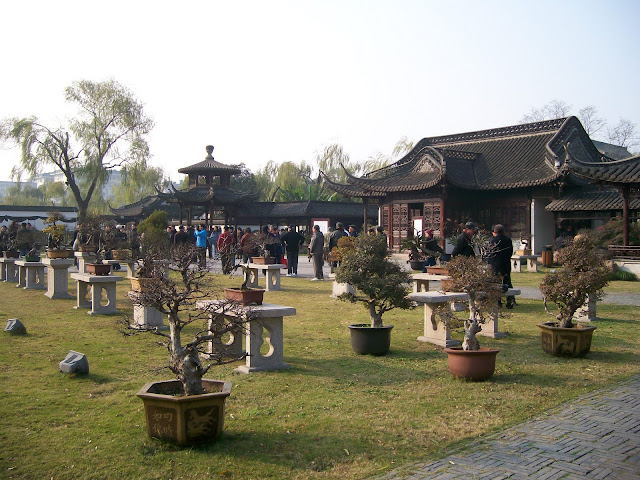 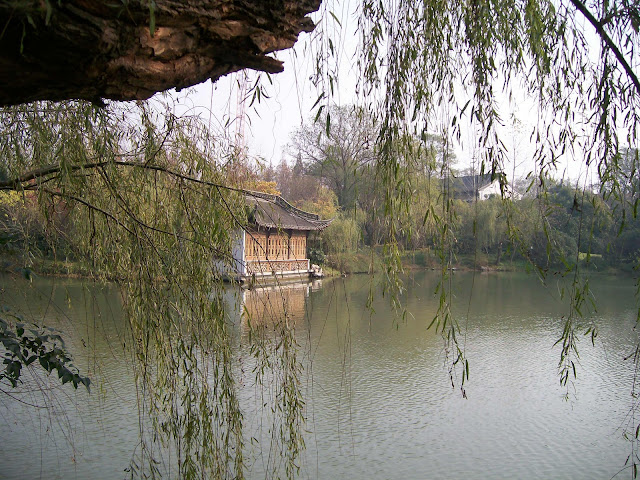 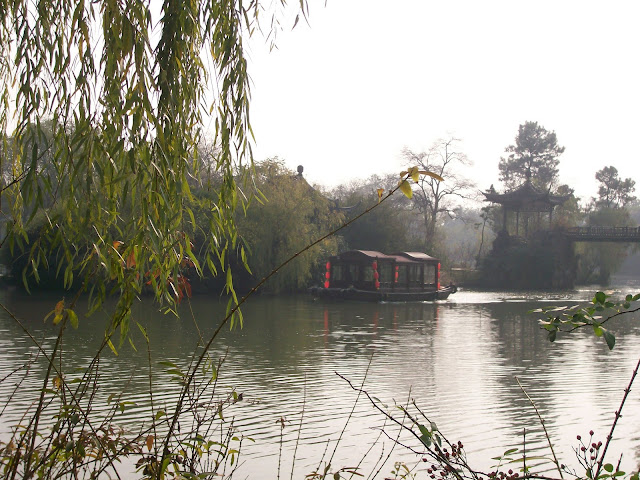 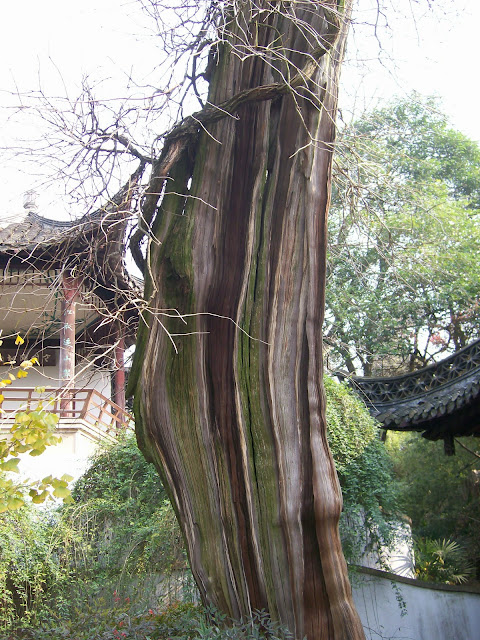 Is this tree painted or real? 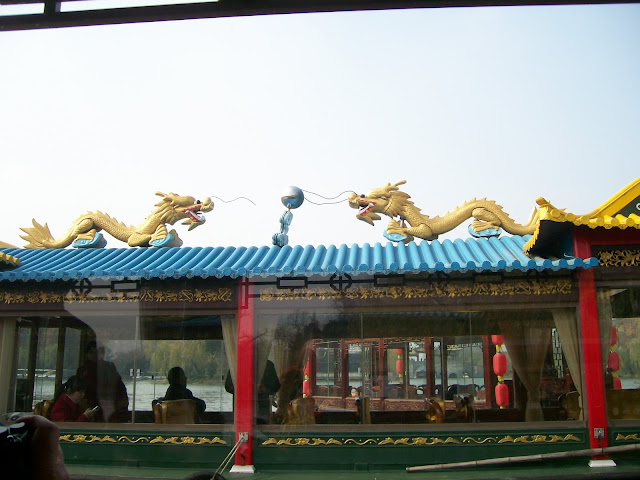 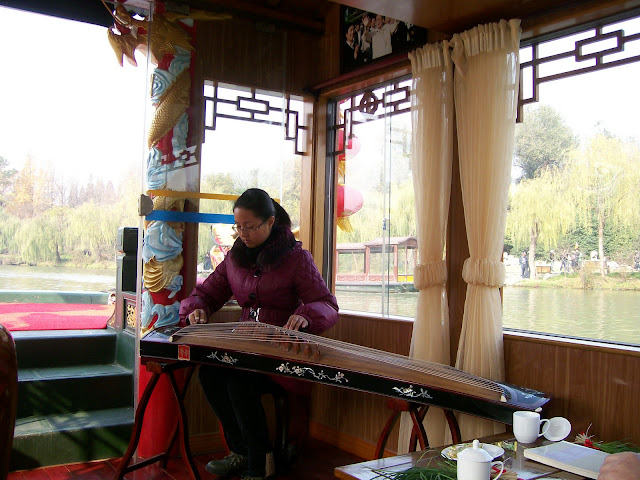 Watery zither music on the boat 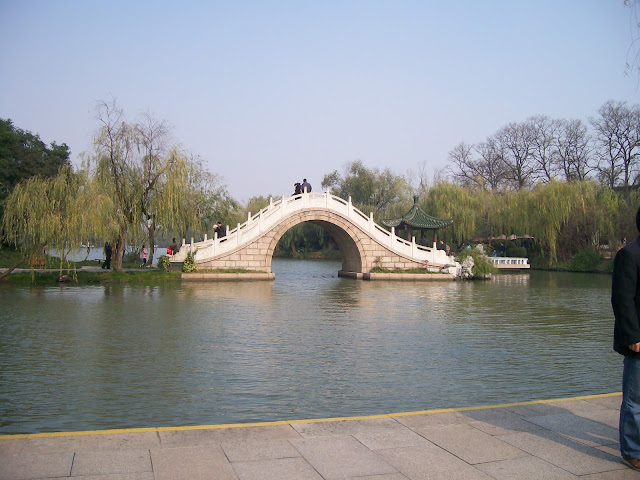 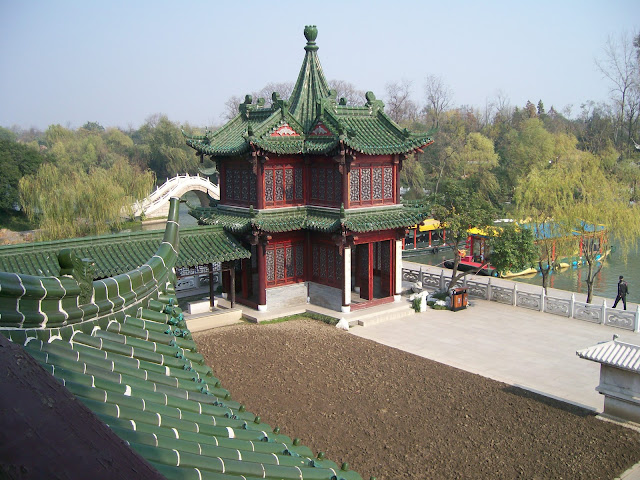 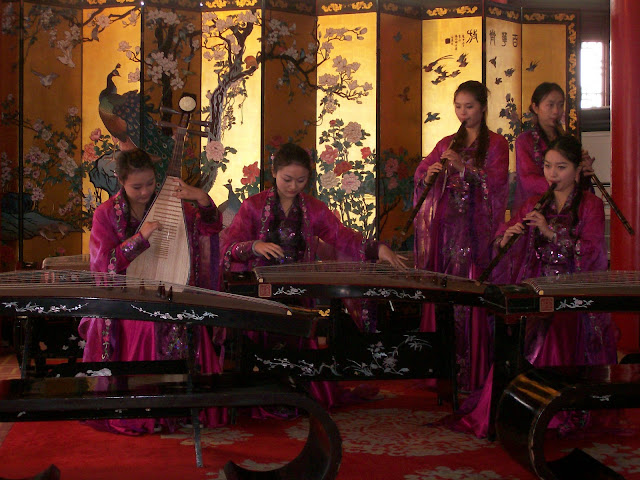 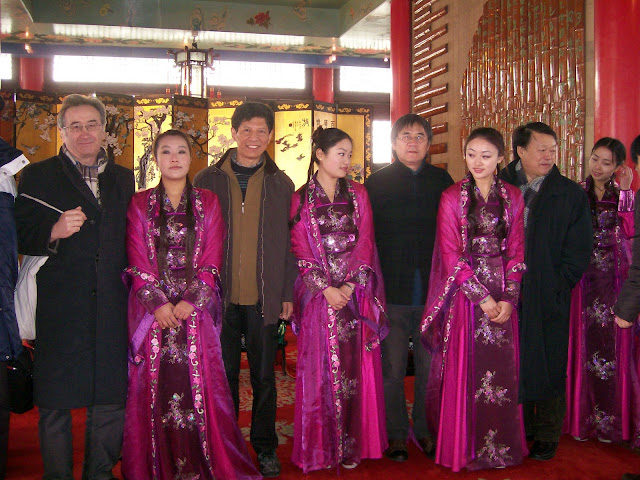 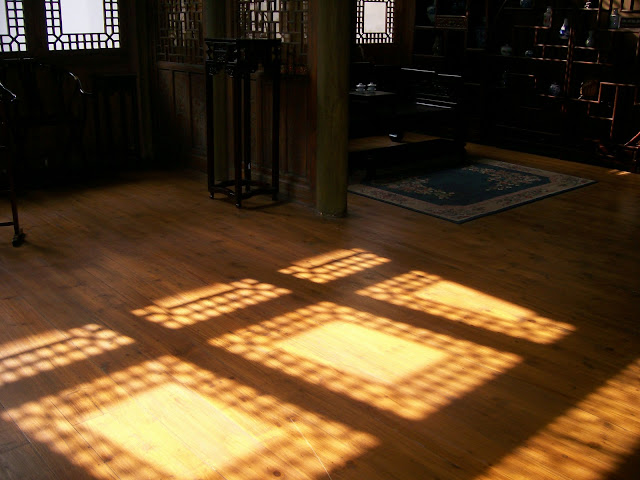 Upstairs in the daughter's quarters of a stately home, light on the floor 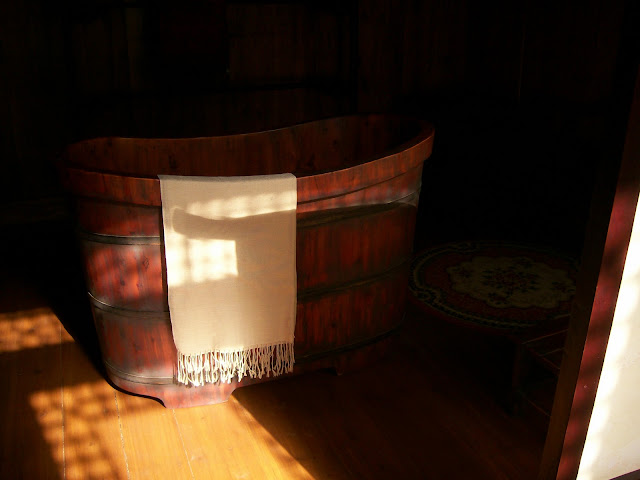 The daughter's bathtub, for light-bathing. 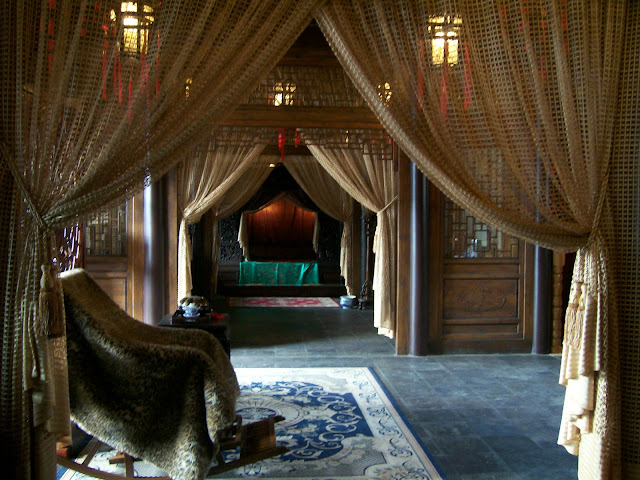 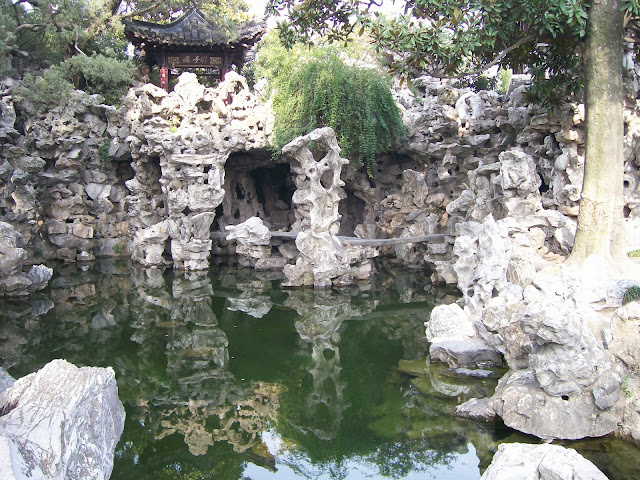 These rocks are real but glued together. In another part of this garden there was a grotto retreat, complete with rock chaise longue, stone table, bookshelves and toilet! 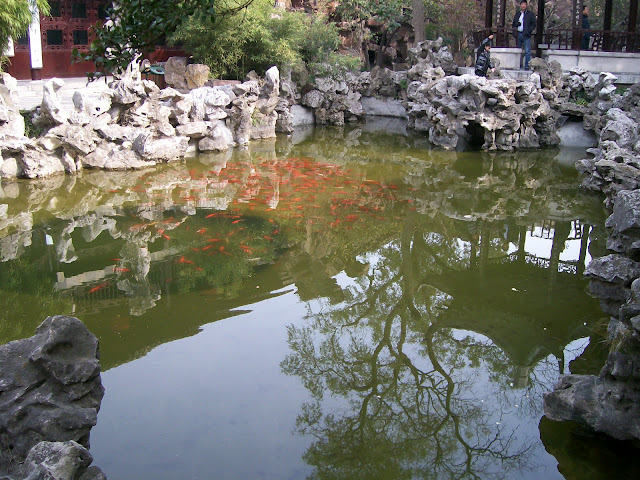 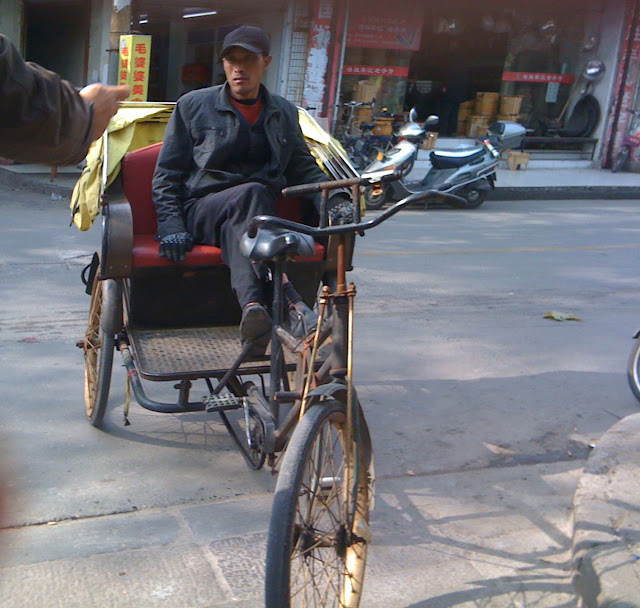 We cross the road back to our minibus 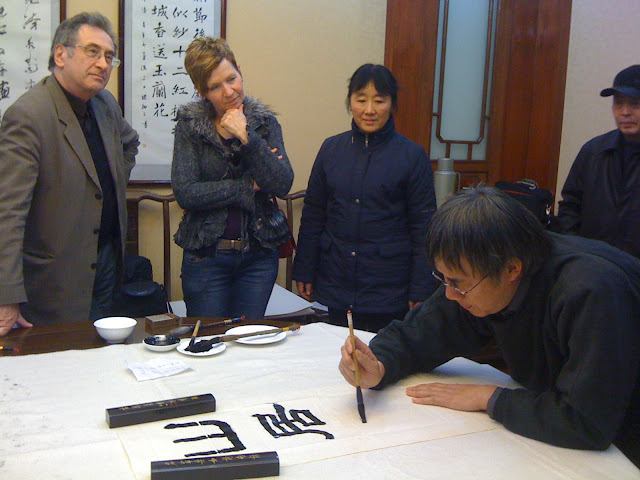 The evening ends with another banquet followed by calligraphy. Here is Xiao Kaiyu drawing the ceremonial poem on rice paper, watched by George and Clarissa.