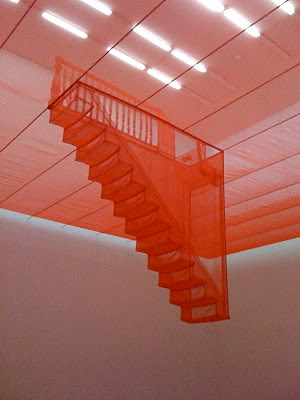 Last night was the final session in our Poetry from Art Shaping Poems spring course at Tate Modern and was a celebration reading. An online anthology of poems from this term is now up on the Tate website. This is a selection of twenty-three poems from many the participants wrote in the galleries during five classes, responding to Gabriel Orozco's Obit Series and Lintels, Ai Weiwei's Sunflower Seeds, Do Ho Suh's Staircase III and Marcel Duchamp's The Large Glass.

Many of the poets read their Sunflower Seeds poems last night, as a mark of solidarity, as we had so enjoyed working with Ai Weiwei's field of sunflower seeds in the Turbine Hall and we are very concerned that the Chinese authorities won't disclose his whereabouts since police detained him at Beijing airport on 3 April. Some new poems after Do Ho Suh's ethereal red staircase also emerged, even though we'd only worked with that installation the previous week and this turned out to be another favourite.
Posted by Pascale Petit at 11:24 No comments: