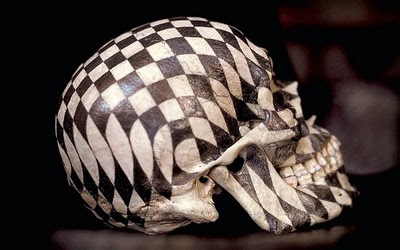 Last night my new Poetry from Art course started at Tate Modern. We are spending the first two weeks in the Gabriel Orozco exhibition and what a gift it is for poets. We sat in the hub room, between La DS and the Elevator, all twenty-seven of us. After introductions and a wander around the show we had a close look at Black Kites (see above), a real skull that Orozco painstakingly drew on with graphite while he was convalescing from a collapsed lung. I read out Carol Ann Duffy's poem 'Small Female Skull' and we compared and contrasted it with Orozco's piece. They are both weighted, compact, immaculately made, serious yet playful.
The focus of this term is image-making in poetry, how to shape poems, responding to art to help make poems more sculpted and visceral. Does the poem have one unifying image (such as a skull) or is it made up of a series of images? At the least, to be aware of the potential of imagery in a poem and how it might shape the raw material of the subject, so that the poem becomes more memorable. In Black Kites the black and white man-made checkerboard pattern surrounds and contains a found object which is a real skull; the chessboard-type grid over a mind. The dance between the two images is mind-boggling.
Duffy's 'Small Female Skull' is also mind-boggling in its ambiguity: is the poet holding her own skull or is she holding someone else's? The focus deftly shifts from inside her head to in her hands and we decided that there was no right answer, that the poem was open to individual interpretation. Early on, the skull is compared to an ocarina – the mind as musical instrument. It is delicate, papery in texture. As is Orozco's skull, with its precise loops-and-lozenge pattern over the faint hairline skull-joins.
Black Kites is in the centre of the Obits Series room. Orozco collected these obituaries from The New York Times over years, selecting the ones he found "provocative or intriguing or funny or banal", removing the name and age of the person, and leaving only the heading which sums up their lives, such as "Ascertained Moon's Make-up", "Originated London Fog Coat" and "Researcher of Fireflies' Flash". Twenty-seven are reproduced on each of the large banner-like sheets of Japanese paper in various sized fonts resembling the originals as they appeared in the papers. 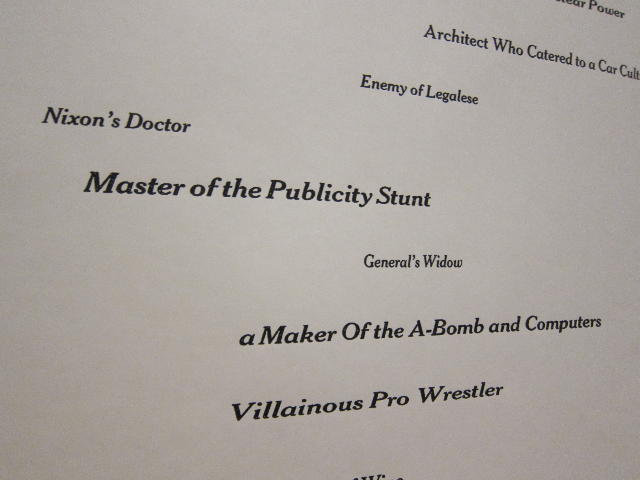 I asked everyone to choose one or two of the obituaries and extend them in prose notes, imagining the life suggested by the obit. They could choose one that reminded them of someone they knew, or make up an imaginary life suggested from the phrase. I then asked them to offer the group a gift phrase from their notes and we all wrote these down. The task was then to write a poem of no longer than thirteen lines incorporating one of Orozco's obits and one line from someone else. The results were imaginative, crazy and funny, and the exercise made for a good icebreaker.
One homework was to carry on working on this poem. I also set a new poem to do at home, playing at making a slight intervention in an environment and recording it, as Orozco does. In Elevator he took a lift and sawed through it, reducing it to his height, and removed the lift from its building. He also took photographs of ephemeral arrangements, such as breath on a piano. Some of his interactions are simple, such as placing oranges on every table in a factory. The task was to go on a walk in either a familiar or unfamiliar environment (it could be an office, street, wood, etc), observe it closely, make notes, take photos if possible. Then make a slight intervention Orozco style. Then write a poem about the process and not to get arrested! There was no obligation to actually do it, if they preferred they could just imagine doing it, but I suggested that it would be good if they could do something, however small.
Orozco has said that he likes to work with ordinary things and alter them slightly so as to see them anew. We discussed that and Robert Frost's idea that "Poetry is a fresh look and a fresh listen." I think that's what Orozco does with his pieces. How can we respond to his work in the same spirit in our poems?
Next week we'll have another wander around the other intriguing rooms then concentrate on Lintels. Tate has given us permission to set up our chairs under the delicate grey lint installation so it will be an interesting experience!
Posted by Pascale Petit at 19:47 4 comments: