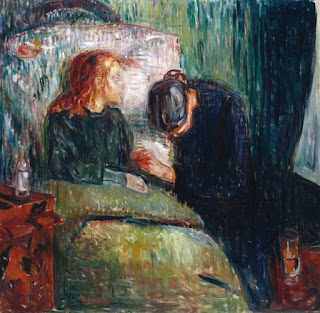 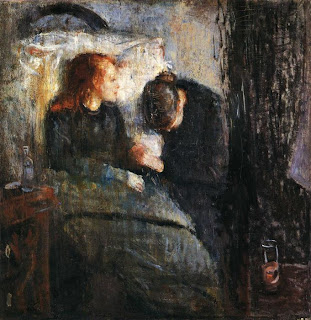 One of the main themes of the Edvard Munch exhibition at Tate Modern is how Munch not only reworked paintings over years but also painted multiple versions of the same subject over decades. For our last session of my Poetry from Art course we sat in the centre of the large deep red 'Reworkings' room, in between two facing versions of Girls on the Bridge, The Kiss, Vampire, Two Human Beings: The Lonely Ones, Ashes and The Sick Child. It was like inhabiting a slightly warped mirror.
We read the tightly formal poem 'Girls on the Bridge' by Derek Mahon, where each stanza is a diamond of mirroring rhymes and syllables, and the very moving 'The Sick Child' by Adam Thorpe, which is in two alternative parts, responding to the multiple version idea. Munch's sister Sophie died of TB when he was thirteen and the first painting in The Sick Child series was his breakthrough into his signature style, away from impressionism. He worked at the painting until the composition and colours expressed the force of the memory.

Munch has written about his process in his journals, here he is writing about colour as joy:

I made an observation as I walked along the street one sunny day on Karl Johan and saw the white houses against the spring blue sky – rows of people which in a give-and-take crossing stream like a ribbon drew themselves along the walls of the buildings. At that moment music reached in – playing a march – I saw the colors immediately change – it quivered in the air – it thrilled in the yellow white façade – the color dances in the stream of people – in the brightened and white parasols – yellow, light blue spring costumes – against the deep blue winter wraps which flickered in the gold trumpets, which beamed in the sun – it thrilled in blue and yellow. I saw differently under the influence of the music. The music doled out the colors. – I got a feeling of joy.

And this is what he wrote about the genesis of The Scream:

One evening I was walking out on a hilly path near Kristiania – with two comrades. It was a time when life had ripped my soul open. The sun was going down – had dipped in flames below the horizon. It was like a flaming sword of blood slicing through the concave of heaven. The sky was like blood – sliced with strips of fire – the hills turned deep blue the fjord – cut in cold blue, yellow, and red colors – The exploding bloody red – on the path and hand railing – my friends turned glaring yellow white – I felt a great scream – and I heard, yes, a great scream – the colors in nature – broke the lines of nature – the lines and colors vibrated with motion – these oscillations of life brought not only my eye into oscillations, it brought also my ears into oscillations – so I actually heard a scream – I painted the picture Scream then.


We were surrounded by powerful emotions: grief, anguish, lust, greed, hope, loneliness. The task was to select a painting and its double and decide on the main emotion they contained, then write a poem about it, avoiding all abstract nouns such as 'joy' and 'grief'. It's a standard exercise in visualising emotions, to give them a colour, a smell, a taste, a sound, a texture, and I also asked if their emotion had a place: where did it happen? Finally, to include an animal: what animal was it?  If they felt particularly ambitious they could use the form of their poem to address the double-painting aspect as Thorpe has. They could also rein in their emotions by using a formal straitjacket as Mahon has with his necklace of diamond-stanzas.

I was expecting anguish but was amazed when they all read back by how many people chose The Kiss and Vampire to respond to – it was a romantic end to our course! The next course will be from 15th October to 19th November this autumn, but I've yet to dream that up.