My Tate Modern course The Spirit of Things: Poetry of the Body, Marlene Dumas and Nicholas Hlobo 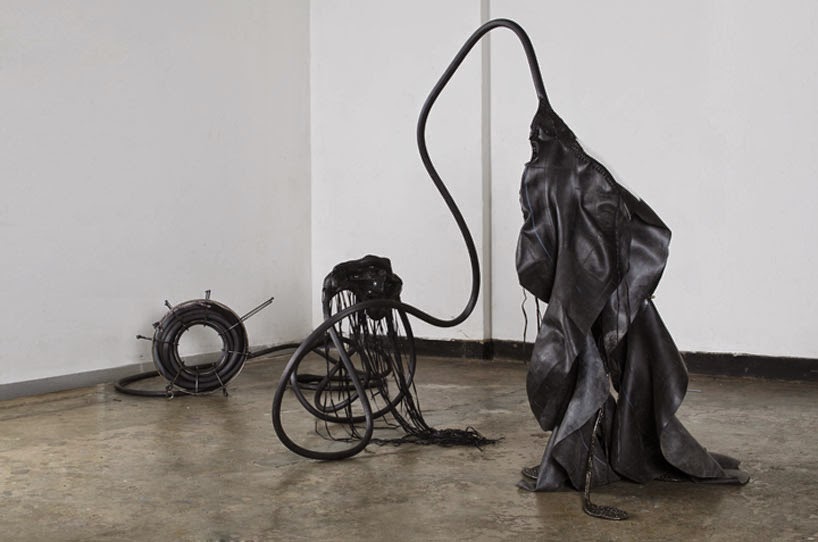 For the third week of my Tate Modern course, The Spirit of Things: Poetry of the Body, we worked with Balindile I by the South African artist Nicholas Hlobo and three of his drawings that incorporate rubber and coral-hued embroidery in his signature baseball stitch.

We spent the first two weeks in the powerful Marlene Dumas: The Image as Burden exhibition, almost overwhelming with its vast rooms of over-life-size faces and bodies staring out at the viewer – confrontational in their gaze, conjured from her masterly brushstrokes, at once alive but ghostly. 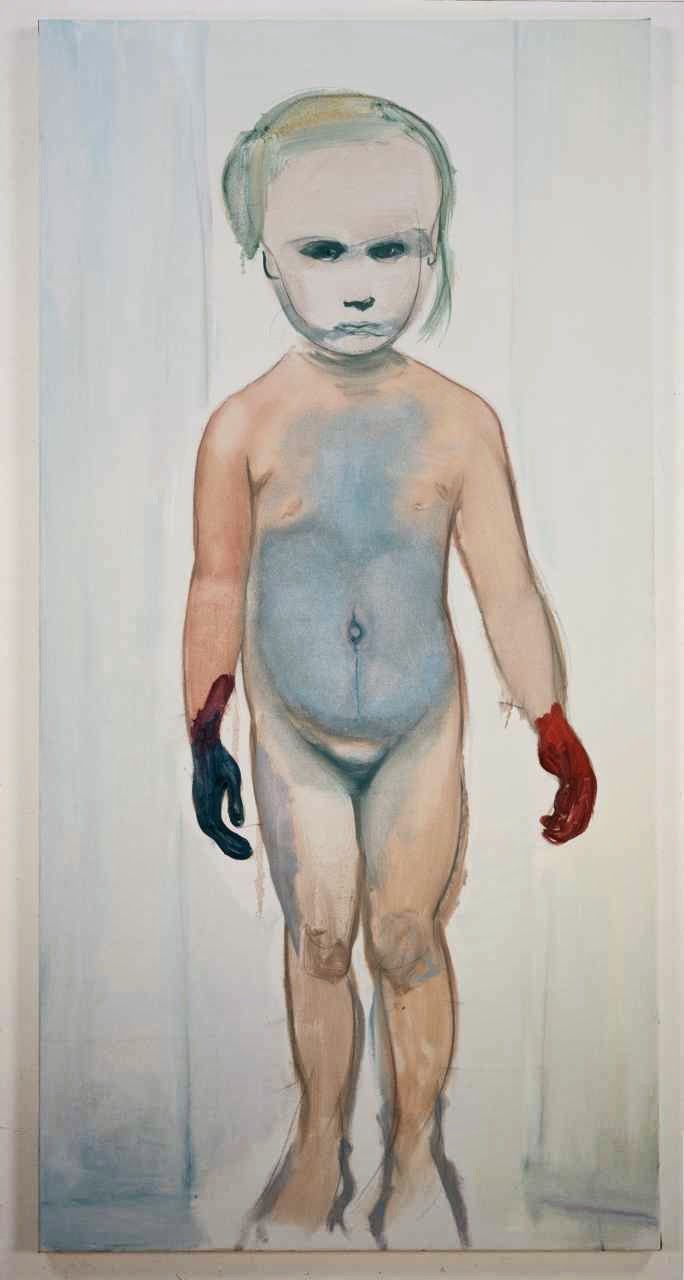 This is her portrait of her daughter, The Painter. To attempt poems responding to Dumas' portraits we discussed the exquisite poem 'Michael's Dream' from Mark Doty's sequence 'Atlantis', where he asks, "What is the body? Rain on a window, / a clear movement over whose gaze?" We also discussed Natalie Diaz' erotic and linguistically adventurous poem 'The Cure for Melancholy is to Take the Horn',  Sharon Olds' 'Poem for the Breasts' from her TS Eliot prizewinning collection Stag's Leap, and the haunting, floating-on-the-page-like-a-spectre 'Some Ether' by Nick Flynn, the title poem of his debut collection, where the main portrait is an absence with a visceral pressure on the narrator, her hands "resting on my shoulders // trying to steer." Marlene Dumas has written much about her art so we also consulted  her writings and quotes, which include this wonderful one:


Drawing is closer to whispering into someone's ear,
while painting is more like the ear itself.
It contains all that has ever entered there.
It listens more than it speaks.
It throws speech into the dark.
Painting is not speechless.
It overflows.
It is a drunken mermaid's song.

Dumas' bodies are figurative, but Nicholas Hlobo approaches the body in a more ambiguous way. He titles his work in Xhosa, an Nguni language spoken in South Africa, so like Dumas, there is much attention to titles and the power of words for him. But it's the materials and textures that dominate, industrial rubber such as the inner tubes of tyres, hosepipes, are contrasted with drawings woven and stitched in precise pink and coral thread. His figures are active and organic, giant coiled blossoms suggestive of inner body parts and sexual organs. 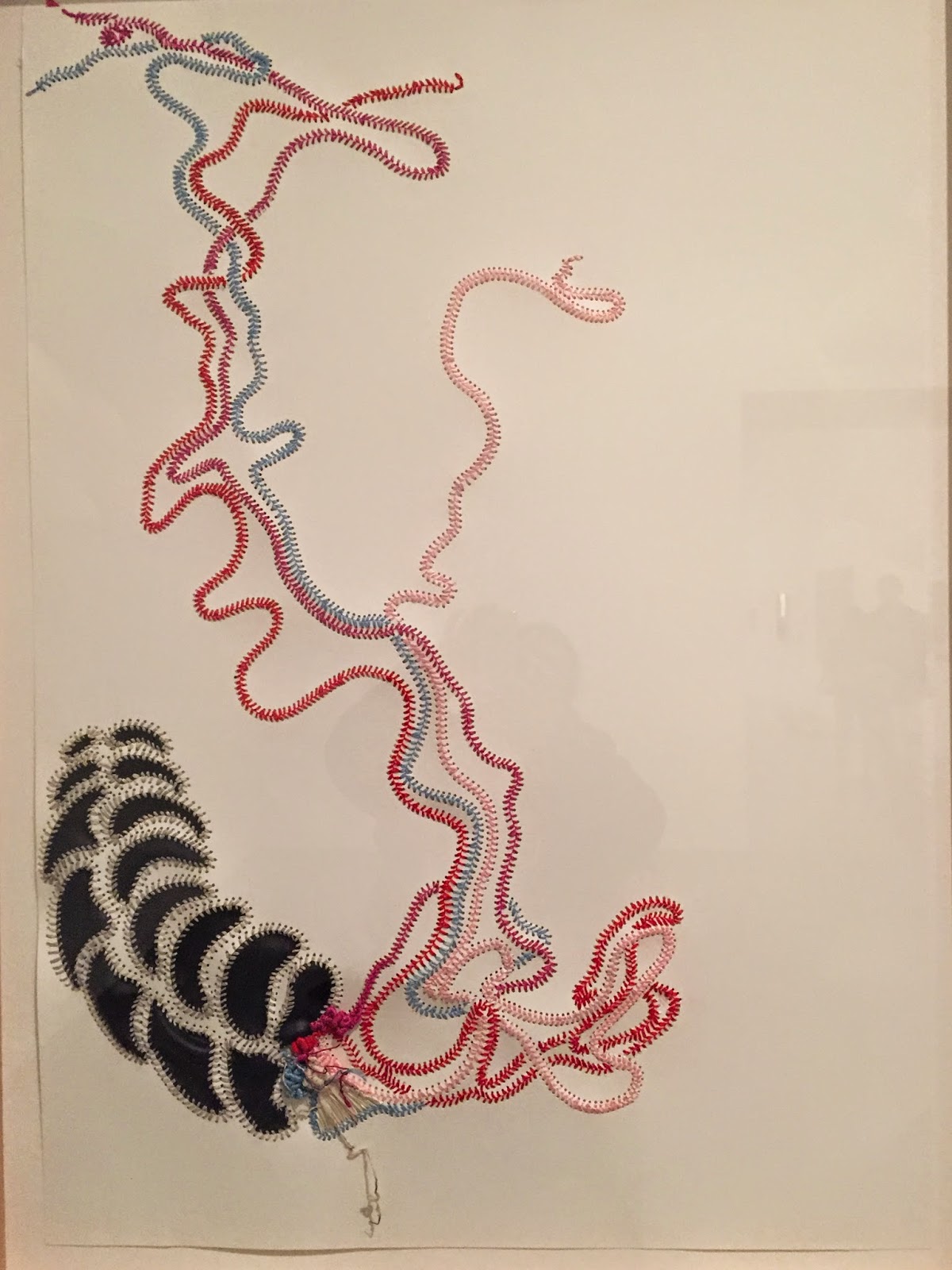 We'll spend two sessions with his works. Last night we started by playing the Definitions Game to create unexpected juxtapositions of concrete nouns and their definitions. I gave everyone  two nouns, each one on a paper strip, they defined them, then we tore the noun from its definition and passed it to the next person to pin to their nouns. So the definition of a purse which starts as "a receptacle for keeping money safe" was matched to a breast: "a breast is... a receptacle for keeping money safe" and so on, 40 surreal definitions which we laid out on the floor to pick and choose from.

We discussed CK Williams' magnificent poem 'Tar', as it's so full of textural descriptions of industrial black stuff – "licorice", "Dantean broth"– the kinesthetic sensations of flexing ladders, and air "gunked with burst and half-burst bubbles". These helped to write poems in response to Hlobo's rubbery and sutured black and pink forms. The group also consulted a list of eight senses and had to write a poem that included them all, as well as one of the surreal definitions. 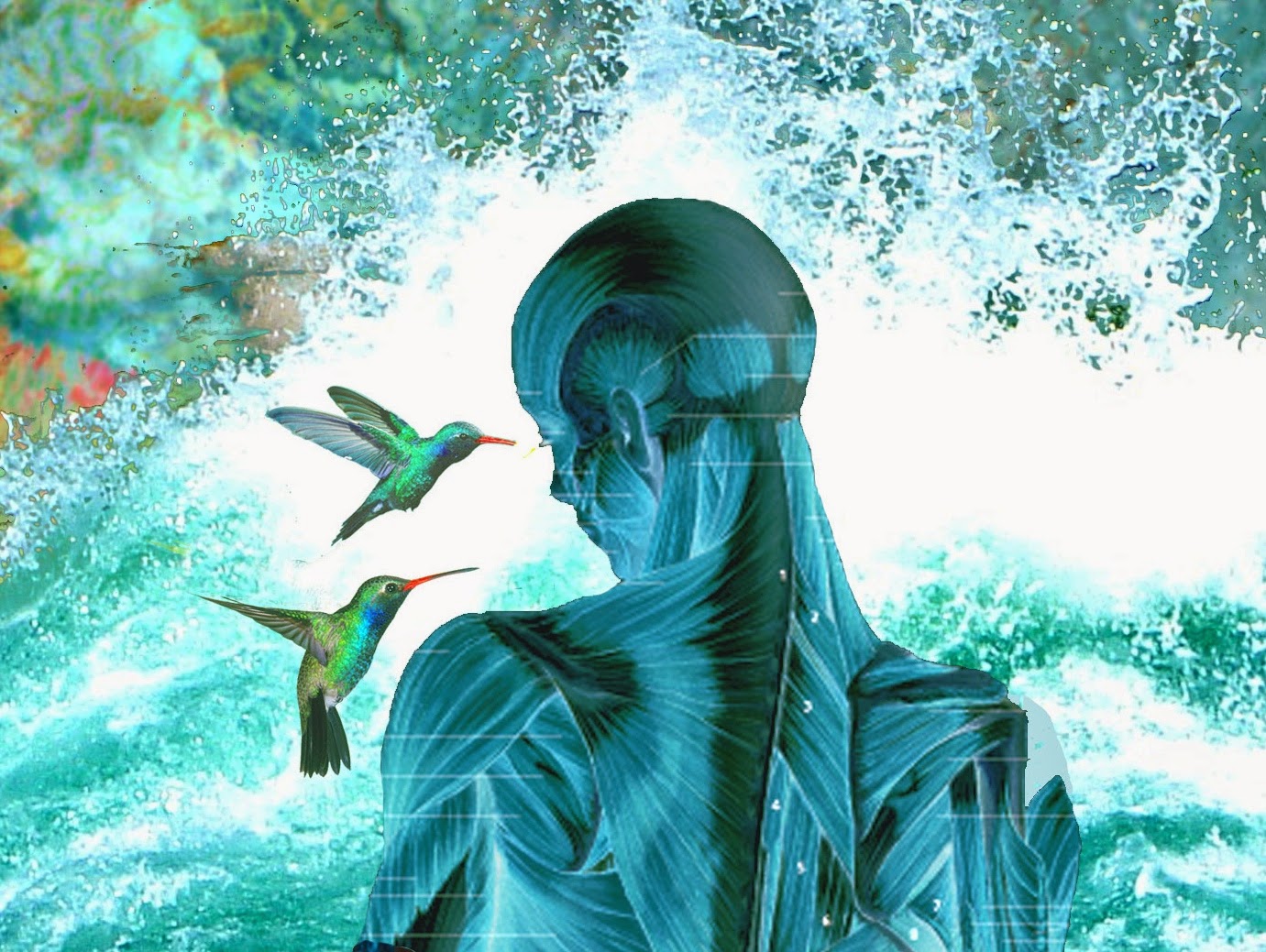 Dave Coates has reviewed Fauverie on his blog and for the spring issue of Poetry Wales. His is an in-depth analysis that explores the spirit of my book:

Here is an excerpt:


"Fauverie works partly in light of her 2001 collection The Zoo Father, if at all possible I’d also recommend reading the earlier book."

"Though it too has its moments of tenderness, The Zoo Father seems in its most emotionally charged moments an angry book. In the first section its imaginative strength is employed in disempowering, making safe or actively harming the father in something like acts of retribution; these poems explicitly relate what the father has done to his family, and are difficult and painful to read. It’s an important collection, one I wish I’d read sooner. Fourteen years later, Fauverie – though it too openly confronts plain facts of violence and abuse – is at heart, I think, a book about finding peace. Though the organising details – the poet visiting her father on his deathbed in Paris – are the same, it does not so much re-write the story as examine it from different angles. The third poem in the collection, ‘Portrait of My Father as a Bird Fancier’, quite explicitly questions the morality of returning to a story, or of selecting another imaginative reality:

‘The one a nightingale serenades
just because he’s in pain – that’s
the father I choose, not the man
who thrusts red-hot prongs in their eyes
so their songs will carry for miles.’

The poem ends with this certainty undermined:


‘He does not make canaries trill so loud
that the tiny branches of their lungs
burst. I am sure of this, though I am just
an ounce in the fist of his hand.’

The poem sets out the risk being taken in this re-examination; the book gives the father a voice on several occasions, and at times permits a view of him not solely as the monster of The Zoo Father, but as an old man himself confronting death; though the potential even for a dying man to commit or denote violence is, as in these lines, rarely far from the surface. It is noticeable, for example, that the father’s pleasures, like ‘Pâté de Foie Gras’ or ‘Ortolan’, require the incarceration and torture of wild animals.


"The final line of the poem and book is ‘I proclaimed peace after bloodshed’; for Fauverie to find this redress at a cost very clearly laid out in the body of the collection, this balancing of books where The Zoo Father perhaps did not, is a rather extraordinary gesture."

It might seem strange to write two books about an abusive father. I didn't expect to write a second. I hope they are not just 'confessional' books. I see my personal experience as an insight into the problem of violence against women and children, rape and child abuse, the abuse of power. It seems a worldwide issue within the family and society. At its worst, there is sadism as well as contempt for women, as apparent in the case of the 2012 Delhi gang rape of a 23 year-old student, Jyoti Singh, on a bus, where the young woman shortly afterwards died of her injuries. I can't comprehend why those young men did that.

I have, however understood some of the factors that made my father behave as he did, he even explained one of them to me, that he himself was abused in the Jesuit school he attended, though he didn't explain that to accept any guilt, just to justify why he went wild when he left home.

It was important to me that in Fauverie every attempt is made to redeem the father as he was dying, but not to flinch from what he has done. If I couldn't forgive him in life perhaps I can in a book, in art.

Image credit: Dragana Nicolic, from the illustrated edition of The Zoo Father, Serbia.
Posted by Pascale Petit at 10:41 2 comments: