What the Water Gave Me – Poems after Frida Kahlo has arrived! 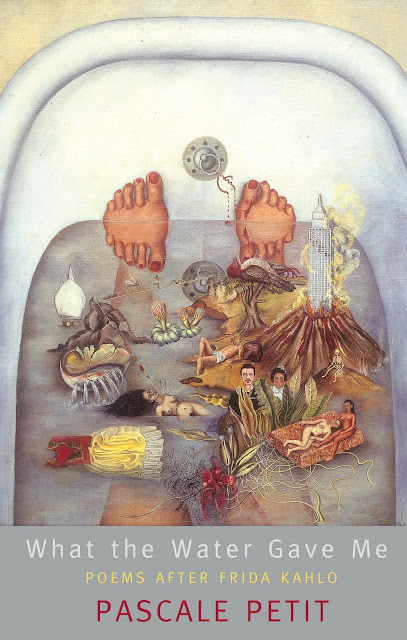 It's really strange to hold a collection that's taken 10 years to write, but here it is at last, with Frida Kahlo's surreal painting What the Water Gave Me on the cover, where she's surrounded by scenes from her life and her paintings, floating like islands in the bath. You can order it direct from my publisher Seren, buy it tomorrow if you come to my first reading from the book on Saturday May 1st at Chepstow, when I'll be reading with the great Les Murray for Poetry on the Border, or come to the London launch at 6.30pm on 17 June at The Horse Hospital, Colonnade, Bloomsbury, London WC1N 1HX (Russell Square tube). RSVP victoriahumphreys@seren-books.com or 01656 663018.

Posted by Pascale Petit at 18:37 No comments:

Notes from the Haut Languedoc

I'm writing this from Lodeve in Herault, France, a place I've known since I was twelve, when my estranged mother bought a steep terraced vineyard on the road from here to the hamlet of Les Plans (The Maps). We used to camp there in the two mazets (shepherds' huts) in summer holiday, getting to know her. The vineyard was a Christmas present to my brother and myself, just a drawing on a card which had advent type windows with maps she'd drawn of a half-hectare of land with a stream, huts, vines, walnut, olive and cherry trees and an underwood. We used to shower under the cascade at the bottom of the steep terraces, wash our clothes in the stream and go crayfish trapping in the pools.
Twelve years ago my mother died and I came to Lodeve to see the land she left me. It has little monetary value and the vines are long gone but it felt very strange owning it so I've kept it wild. The far mazet had vanished into the sous-bois and brambles but the first was still there, even some of our furniture. Where there was once a vineyard below us there is now a house, but the farm next door is still there and the farmer's wife remembered me, saying that seeing me again was like "a mountain meeting another mountain". I visited the Mayor in Les Plans, the same mayor who three decades ago had delivered milk in a horse-drawn cart.
Seven years ago, two months after I met my second husband, we came here for a holiday, that August when it was so hot people died. We sweltered in this two star hotel then, and explored the surrounding landscape which I had previously ventured onto on my own by bus. We drove over the Grands Causses – great moors on the limestone plateaus, and we fell in love with the solitude and silence of them. So on this visit, almost cancelled because of the Iceland volcanic eruption which disrupted flights, driving our car from London, we have ranged further, a hundred kilometres a day, exploring the Cevennes in the Massif Central, and the gorges I have always wanted to see – the Tarn and Jontes.
Our first excursion was to see the  wolves of Gevaudan in the Lozere area. On the way I teased that they were putting on their wolf costumes and practising howling. This area is famous for the Bete du Gevaudan, a wolf which had interbred perhaps with a hyena and eaten many people. There are 100 wolves in a semi-wild state in this park. As soon as we entered and looked into the Siberian wolf reserve, the limping alpha male assumed a howling stance and all the others joined in. The sound was nothing at all like it is in films, it seemed to surround us and each wolf had a different pitch. They looked enthralled with their singing. Then they all arranged their tails according to a strict hierarchical code and the alpha male and female strutted about checking that all was in order, the lowest ranking with tails tucked under cowering hindquarters.
In a corner of the park, past the Mongolian red wolves, the Arctic, Polish and Canadian packs, three males were isolated, with huge open wounds on their lower backs, the result of attempts to challenge the boss.
We also saw two green lizards in the park, one was a male with a sky-blue throat. I hadn't seen one of those since my childhood in the vineyard, when they used to flash across the path between our two mazets.
The next day we drove to the Gorge de la Jonte because B had read that it is famous for its griffon vultures. We recrossed the viaduct of Millau (highest in the world) which connects the Causse du Larzac with the Causse du Mejean, and swung around the hairpin bends of the deep and vast Jonte gorges, and reached the Maison des Vautoures. I inched out onto lookout paths, desperately clinging to the rock face. It was worth the vertigo though, to reach the terrace with telescopes aimed at various nests and perches where we could watch the griffons.
Tomorrow we hope to go to the Tarn. Yesterday we drove up on to 'the balconies of the Midi' as they say here – the Larzac moors which overlook Les Plans and Lodeve, and peered over the vast panorama towards the lower Languedoc while a nightingale and cuckoos sang. On the way up we passed a house called Chantoiseau – Birdsong.
I hope to post photos from the trip when I get back to London from this land of The Maps.
Posted by Pascale Petit at 15:40 2 comments:

Reading with Les Murray on 1st May in Chepstow, South Wales

Les Murray will be reading in Chepstow, South Wales, for Poetry on the Border on 1st May and I am thrilled to be reading with him. He's both a great world-class poet and a lovely generous-hearted person whose poetry has magnificent sprawl and a high degree of trance. Among his many honours he has won the TS Eliot Prize and has been awarded the Queen's Gold Medal for Poetry on the recommendation of Ted Hughes. He's been very generous to me, encouraging my work since before the publication of my first book Heart of a Deer, and over the years he's published many of my poems in Quadrant, the magazine he edits. 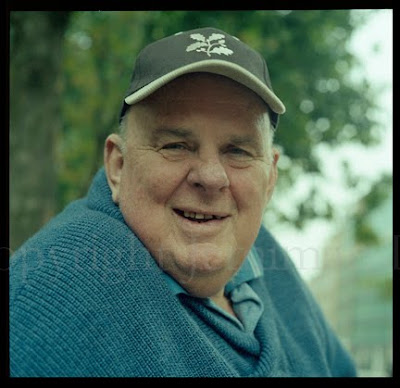 This is Jemimah Kuhfeld's portrait photo of him, as part of her Poets Project. Les will also be giving the Poetry Society's annual lecture on Tuesday 11 May at Senate House, London and I'm really looking forward to that as well. If you live in South Wales and can make it at 7.30pm on Saturday 1st May for our reading, please come along to the Drill Hall, Lower Church St, Chepstow NP16 5HJ.
For more details and to book: http://www.poetryontheborder.org info@poetryontheborder.org

Posted by Pascale Petit at 16:22 No comments: 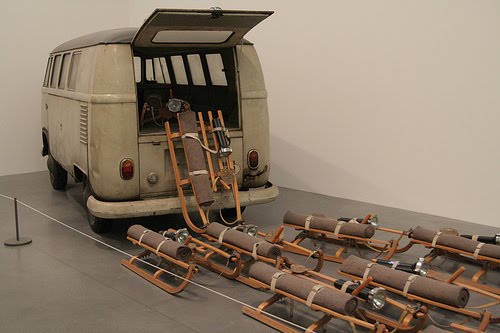 Our spring term of the Poetry from Art course is finished, but you can read poems by the group on the Tate Modern website. This selection includes responses to Joseph Beuys’ The Pack (above) and Lightning with Stag in its Glare (below), Giuseppe Penone’s Tree of 12 Metres (see previous posts), Robert Therrien’s Red Room and Arshile Gorky’s paintings Waterfall and How My Mother's Embroidered Apron Unfolds in My Life.

The poets wrote far more poems than this online selection, all started in the 10-15 minutes I gave them to write in the galleries. It's a large group, 27 this term and 29 in the next, so reading back takes a while and we spend time finding ways in. For our first session in the Joseph Beuys room for The Pack, I asked them to imagine what they might need to survive, as the 24 sleds are Beuys' survival kits of fat, felt and a torch. We discussed his myth of how, during WWII, his plane was shot down over the Crimea and he was rescued by nomadic Tartars, who saved him by wrapping him in fat and felt. Then I asked them to write a poem responding to the installation, going through all eight senses in turn (the usual five plus kinesthesia, the organic sense and synesthesia). 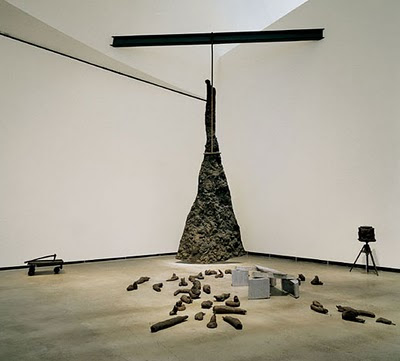 Lightning with Stag in its Glare Joseph Beuys

We then looked at the elemental poetry of Tomas Transtromer and storm poems by Eugenio Montale and Theodore Roethke to approach Lightning with Stag in its Glare.  I first saw this piece in the 80's when I was still at the Royal College sculpture school, and casting in bronze, so this thin cast of the side of a huge clay mound fascinated me as a technical achievement. I see it as both mountain skin and lightning bolt, retaining the power of the bronze furnace. Hard to think how to write poems from such an abstract piece in ten minutes but do read the results as well as poems about Therrien's glowy Red Room and Penone's carved larch, both of which also generated many poems. The summer term starts on 7 June and I already know where we'll be the first two sessions but I'm not saying yet.

Posted by Pascale Petit at 12:13 No comments: